The Smart Growth Programme is financed through two sources:

The final amount of national funds, mainly private, at the time of closure of the Programme will be substantially higher. The stated amount was calculated based on general Union rules, according to which the minimum contribution of national funds in 15 less developed voivodeships amounts to 15%, and in the Mazowieckie Voivodeship – 20%. However, State aid will be involved in many projects implemented under the Programme, requiring higher national contribution provided by project implementers, mostly from private funds.

The allocation of funds for individual priorities: 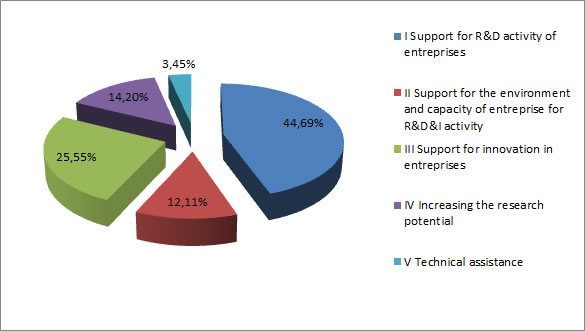 The agreement or the decision contains in particular the following information:

Method of financing of a given project depends on the type of the entity using the funding and the specific nature of the project.

According to the general rule, co-financing may cover only the so-called eligible costs. A catalogue of eligible costs is established for each programme and for each type of project. If during the implementation of a project there arises a need to carry out tasks which were not included on the list of eligible costs, such tasks should be financed from beneficiaries’ own funds.

The majority of projects financed under the Programme may require that the entities implementing the programme participate in the covering of its costs by making the so-called own contribution. This principle is applicable to projects involving State aid.

Beneficiaries receive co-financing in the form of: